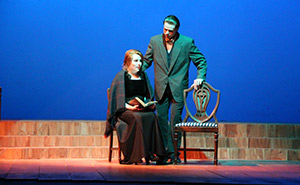 Butler Community College Theatre concludes its 2015-2016 Season of Adventures with “The Last Lifeboat” by Luke Yankee.

The play tells the story of J. Bruce Ismay, the man who built the “most magnificent ship the world had ever known,” the RMS Titanic. Glory, regret and survival are at the center of this epic memory play. A cast of 11 actors play more than 50 roles and through the artistic conventions of the theatre recreates the life of Ismay and the sinking of his creation.

The play’s director, Fine Arts Lead Instructor and Assistant Professor of Theatre Samuel Sparks says, “This play combines the magic of the theatre with one of the world’s great tragedies. The sinking of the Titanic is an event now of mythic symbolism that fascinates generations of people. Mr. Yankee’s play captures the struggles of survivors and uses artistic simplicity to showcase the journey they face.”

“I’ve had a remarkable time working with this company of students,” said Sparks. “They bring vibrant imagination and professionalism to the rehearsal room and because of this we’ve been able to create a creative and nuanced production.”

The Butler Fine Arts Box Office is open 1 p.m. to 5 p.m., Monday - Friday. Reservations can be made by calling 316-322-3262 or online by visiting jaduqa.butlercc.edu/boxoffice. Tickets are $5 for adults and $2 for children and senior citizens. Tickets are free with a current Butler ID, but reservations are still needed.