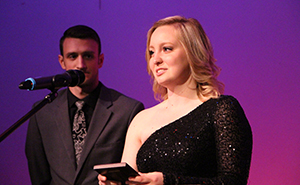 There was a time  Scott McPhail seemed an unlikely choice to speak at Butler Community College. He once flunked out of Butler with no direction and no idea what to do next.

Once a Butler Headliner, McPhail had lost his music scholarship and was working at a large department store. He begged the administrators to allow him to return. They agreed, on the condition that he wouldn’t be involved with music theatre or anything else until his grades improved.

His first semester back, McPhail took a whopping 23 hours and made straight As. He went on to graduate from Butler and the University of Kansas before moving to Los Angeles, where he has been a success in the movie business ever since.

So what changed? McPhail found something he was passionate about.

“Life is not a dress rehearsal,” said McPhail, Executive Director of International Creative Services for Paramount Pictures. “You get one time around and that’s it. It’s OK to fall on your face. But you’d better pick yourself up and keep going.”

It was McPhail’s experience on the Kansas movie “The Crude Oasis” that sparked his interest in filmmaking. El Dorado’s Alex Graves was directing a movie for the first time, and gave McPhail more and more responsibilities as the project went on.

Five years later, McPhail was directing his own movie. He’s been involved in the production of numerous hits in Hollywood, including Shark Tale, Madagascar, Kung Fu Panda and the Shrek series.

He remains close with Lead Theater Instructor Bob Peterson, who has been at Butler for more than 30 years.

“Bob plays the Spelvin Awards up as if they were the Oscars,” McPhail said. “The thing about Bob is, he introduced me to the idea that people can celebrate you for doing what you love. And that’s a special thing.”

Michele Banks as well as Katie Banks-Todd and Isabel Todd, all of El Dorado, also assisted with the awards presentations.

Below are this year’s Spelvin Award recipients, listed by hometown.

Brandon McKinney: Best Actor for role in “Spaced Out”