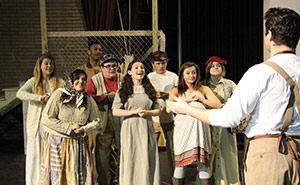 A large cast of Butler Community College theatre students is preparing to present “Urinetown: The Musical.”

“Urinetown: The Musical” is part satire, part spoof, part love story, and part musical comedy. The musical takes a self-reflective look at a Gotham-like world in the near-future where, because of a 20-year drought, residents are forced to pay to use public toilets and private urination is prohibited. In this world two idealists meet, fall in love, and stimulate revolution. “Urinetown: The Musical” is a three-time Tony Award winner featuring a wide array of songs including witty ballads, rousing marches, upbeat jazz songs, and clap-worthy gospel-style numbers. Book and lyrics are by Greg Kotis and music and lyrics are by Mark Hollman.

“This smart high-energy musical will make you think and make you laugh,” said director and costume designer Samuel Sparks, assistant professor, theatre and speech. “We’ve assembled a great company of students who bring energy and creativity to the process.”

The Butler Fine Arts Box Office is open 1-5 pm Monday-Friday. Reservations can be made by calling 316.322.3262 or online. Tickets are $5 for adults and $2 for children and senior citizens.