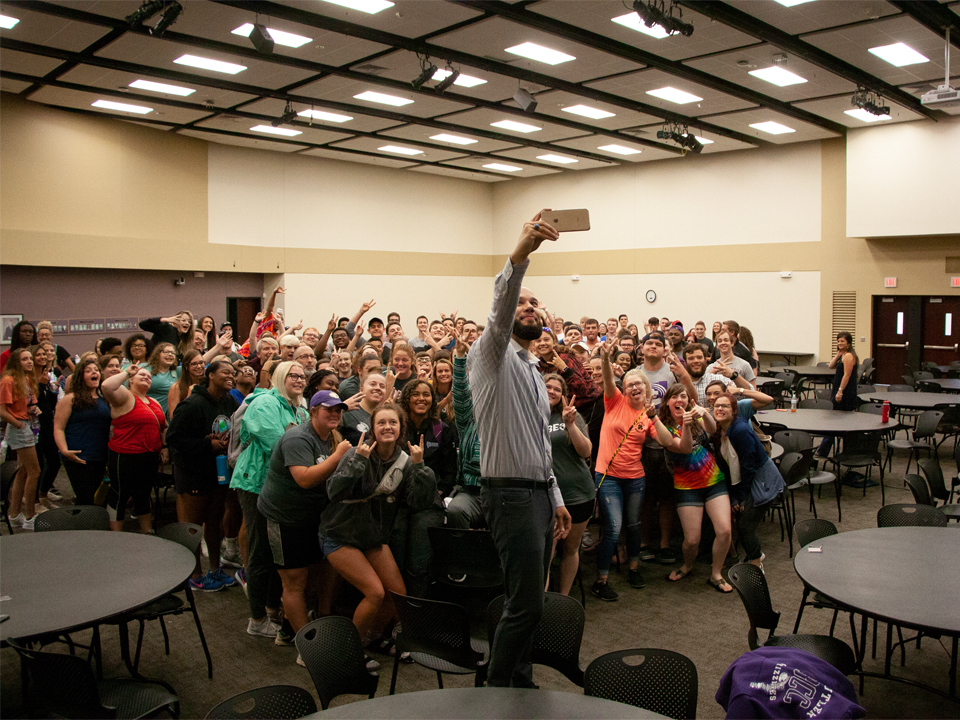 For David Carter, Ph.D., there’s no place like home. Home to him is Butler Community College.

“I have so many fond memories of my time here,” Carter told the crowd at a staff conference during orientation week in September. “My mind got stretched here. The courses I took changed my life. When I was being chased by lions, it felt good to go to Butler. Butler represents that calming presence.”

At the beginning of the school year, Carter, who is an international speaker and has appeared on C-Span and TEDx, gave two presentations – one for faculty and one for students – on how to empower their lives. More than a decade ago, Carter took classes at Butler. Both his parents were illiterate, he was raised in poverty and foster homes and eventually, at 17, joined the U.S. Air Force.

It was at McConnell Air Force Base that he found Butler. He later obtained a bachelor’s degree in history from the University of Maryland, a master’s degree in military history from Norwich University and a Ph.D. in higher education from Benedictine University. He became a teacher and speaker; his goal was to empower others.

“With every goal, there will be an obstacle. You represent that calming presence. Try to be that for your students,” Carter told faculty and acknowledged four of his mentors who watched his presentation. They sat riveted - two had tears in their eyes.

“More than 10 years ago, he was very quiet and reflective. He would study people,” said Shellie Gutierrez, Carter’s education professor. “He commanded presence like no other student. He’s just amazing, and I’m so glad I got to be a part of his life.”

Carter explained to the faculty that what each and every teacher is doing is impactful. They are not just teaching a subject; they are changing a life.

“It’s all about being the best teacher you can be,” Carter told the crowd. “You’re helping to change people who will have an impact on society.”

To the students, he said to never give up and always be flexible. He told them to reach beyond their expectations, hold on to their humility and leave a legacy.

“Get an education so you can inspire and move others. Remember the goal of graduating from Butler,” Carter said emphatically. “But also remember, you’re just getting warmed up!”