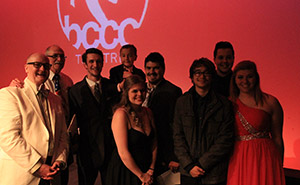 The evening was hosted by Michele Banks of El Dorado. Banks welcomed more than 70 attendees made up of students, their friends and family, faculty and staff.
The Spelvin Awards began in 1985 with three primary functions- to celebrate the concluding theatre season, to acknowledge outstanding work performed and demonstrated during the season, and to allow theatre patrons a voice regarding the season. Over its 30-year history, the Spelvin Awards have honored, such former students as, university dance instructor Jennifer Carra, Los Angeles-based actor Stacey Hinnen (Criminal Minds, NCIS, Modern Family), Scott McPhail (Paramount Pictures), Los Angeles-based actor Emily Osbourne (Scandal), and New York-based actor Gabe Templin.
Below is a list of award winners by hometown:

Briana Keene for Best Cameo Actress (Kelly in Band Together)