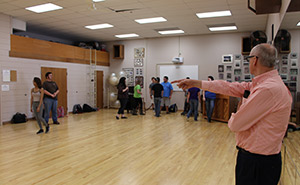 Brown will be on hand as the Butler Theatre students present his adaptation of “Tom Jones” which is based on the novel, “The History of Tom Jones, a Foundling” by Henry Fielding. Performances will run Oct. 1 - 3 at 7:30 p.m. and a matinee performance Saturday, Oct. 3 at 2 p.m. in the Fine Arts Theatre on Butler’s El Dorado campus. The production is recommended for mature audiences.

A talkback with Brown and reception will follow the opening night performance on Thursday, Oct. 1 at 7:30 p.m. Brown is an award-winning playwright and is well-known for his adaptation of “Around the World in 80 Days,” which has been produced off-Broadway and internationally. He also wrote “China - The Whole Enchilada” which was named Outstanding Musical at the 2008 New York International Fringe Festival.

Brown’s new adaptation of Henry Fielding’s classic novel, “The History of Tom Jones,” tells the story of the life, loves and adventures of the charming and rascally title character.  Fielding, in his 18th-century novel, reinvented comedy and filled “Tom Jones” with fresh, new concepts.  In his 21st-century adaptation, Brown has thrown in the splash-dash of the Marx Brothers and heaping helpings of Monty Python silliness. It has been called a charming tale full of timeless wit and good old-fashioned bawdy fun.

The play’s director, Lead Theatre Instructor and Professor of Speech and Theatre Bob Peterson says, “The play deals with the themes of hypocrisy, virtue and vice. Qualities that are as real today as they were 250 years ago. And, playwright Mark Brown has taken Fielding’s humorous telling and given it a madcap style.”

According to Peterson, who has taught at Butler for more than 30 years, Butler Theatre traditionally tries to include a classic piece of literature into its season and “Tom Jones” fit perfectly into this year’s “Season of Adventures” theme. Peterson promises great fun saying, “The theme of ‘virtue and vice’ is still there, but our audiences will get to experience this classic material in a ‘Saturday Night Live/Monty Python’ kind of tone.”

The cast is made up of 12 students, all on theatre scholarship, which includes full in-state tuition and books. “The cast has been delightful,” says Peterson. “They have jumped into the rehearsals with imagination and inventiveness.”

The Butler Fine Arts Box Office is open 1-5 p.m. Monday-Friday. Reservations can be made by calling 316-322-3262 or online at jaduqa.butlercc.edu/boxoffice. Tickets are $5 for adults and $2 for children and senior citizens. Tickets are free with a current Butler ID, but reservations are still needed. The Butler Theatre Department produces four productions annually and offers full in-state tuition and book scholarships to qualifying students in both performance and technical theatre. Interested students should contact Bob Peterson, bpeterson@butlercc.edu.