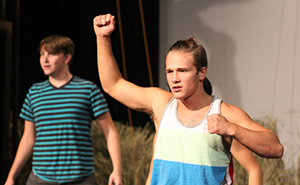 A large cast will come together to present “Tarzan®: The Stage Musical” in mid-November.

The Butler Community College Theatre Department will present “Tarzan®: The Stage Musical,” with music and lyrics by Phil Collins and book by David Henry Hwang, based on the Disney film adapted from “Tarzan of the Apes” by Edgar Rice Burroughs Nov. 19 – 21 at 7:30 p.m. in the Fine Arts Auditorium on the El Dorado campus. A matinee performance will be presented Saturday, Nov. 21 at 2 p.m.

“Tarzan®: The Stage Musical” is the story of a boy raised by apes as one of their own only to later meet humans and discover his true self and place in the world. Disney Theatricals adapted the musical from the Disney film for Broadway. Butler Theatre presents it as the second show of its “Season of Adventure.” Notable songs include “You’ll be in My Heart,” “Two Worlds One Family,” and “Strangers like Me.”

Director and costume designer Samuel Sparks, who is an assistant professor of theatre, leads the company of 32 actors in this production. “We’ve assembled a great company of students for this show who bring creativity and energy to this exciting musical,” says Sparks. “Not only do we have more than 30 in the cast, we have a pit orchestra made up of faculty and student musicians and about 20 students working backstage on scenery, costumes, lights, sound and projections.”

Bernie Wonsetler, Associate Professor of Theatre, is the scenic and lighting designer, Matthew Udland, professor of music, is the music director, and Henry Waters, associate professor of music, and is the choreographer. Jeremy Buoy, a sophomore from Valley Center, is stage manager.

“This show is entertaining for the whole family. Anyone who loves the story of Tarzan or loves adventures will enjoy it,” says Sparks. “While the stage musical varies from the original stories and even from the Disney film, it stays true to the spirit of Tarzan’s personal journey and adds new music and very theatrical designs.”

Reservations are highly recommended and he Butler Fine Arts Box Office is open 1-5 pm Monday-Friday. Reservations can be made by calling 316-322-3262 or online by visiting jaduqa.butlercc.edu/boxoffice. Tickets are $5 for adults and $2 for children and senior citizens. The Butler Theatre Department produces four productions annually and offers full tuition and book scholarships to qualifying students in both performance and technical theatre. Interested students should contact Bob Peterson, bpeterson@butlercc.edu.